A new group advocating for patients is fighting big pharma with their own super PAC.

Fed up with the debilitating hikes in medicine costs, cancer patient David Mitchell started Patients for Affordable Drugs Action, a new patient-driven super PAC. The group attacks politicians with a history of supporting Big Pharma, while supporting those who fight against it, regardless of party affiliation.

Patients for Affordable Drugs has already run a $1.5 million campaign attacking Bob Hugin, the opponent to Sen. Bob Menendez in New Jersey. Before running for senator, Hugin was the CEO of Celgene, a drug company that raised the price of a cancer drug 88 percent over just seven years. The same drug brought in $7 billion in revenue for Celgene, and Hugin took home a check of $22.5 million.

This is the first super PAC of its kind advocating for patient rights, and it receives no industry funding.

The Bottom Line: Americans shouldn’t have to start a super PAC to have a say in their own government. The pharmaceutical industry spent $84 million on lobbying this year alone, and a whopping $279 million last year.

On Monday, the Treasury Department announced it will no longer require dark money groups to disclose who their donors are to the IRS.

In a massive blow to campaign finance transparency, the Treasury Department announced on Monday that 501(c)4 organizations (tax-exempt “social welfare” groups) are no longer required to disclose who their donors are to the IRS. 501(c)4’s can operate as dark money groups by making massive political contributions without divulging to the public who funds them. Prior to Monday’s announcement, these groups were required to disclose their donors to the IRS, even if they didn’t disclose them to the public.

Since 2010, when the Supreme Court ruled in Citizens United case that corporations could spend unlimited amounts of money on elections, these dark money groups have spent $746 million on federal elections. In just the 2018 midterm cycle, nearly 44 percent of television ads have been purchased by dark money groups. For one candidate in Ohio, only $100,000 of his $1.6 million campaign war chest can be traced back to the donors.

A former general counsel with the Federal Election Commission said that this new ruling “deprives the IRS of an important tool to make sure these nonprofits are complying with the law.” The individuals and corporations that are typically barred from influencing elections, like federal contractors or foreign donors, can have the opportunity to do just that if no one holds them accountable.

The Bottom Line: The Treasury Department’s new policy will shield dark money groups from the light of transparency. Americans deserve to know who is influencing our elections and policies. We’re already seeing dark money groups pledging millions to impact the Supreme Court confirmation process. The new ruling means that we likely will never know who’s really behind those efforts.

It all started with a typo. Maine lawmakers are claiming that a drafting error in the state budget passed last year, bars the Maine Ethics Commission from being able to distribute payments to candidates participating in the Clean Elections Act.

The Act, which passed in 1996, set up a voluntary program where candidates for state office — from governor to state representative — could receive full public campaign funding, provided they stopped taking private contributions and demonstrated sufficient community support with enough $5 donations. In 2015, a ballot initiative strengthened the Act by increasing funding as well as penalties for campaign finance violations.

Now, because of the typo, the Ethics Commission can’t give 80 candidates their allocated funding (totalling $1.4 million), leaving them in limbo with no cash four months out from the general election. Democrats are claiming it’s a ploy to keep them from being competitive in November, because 90% of democrat state senators are using the program, while only half of Republicans are.

In response to the funding block, Maine Citizens for Clean Elections filed a lawsuit against Gov. Paul LePage for breaking a contractual agreement to the publicly financed candidates. The candidates held up their end of the bargain, they argue, but the government has yet to hold up its. The oral arguments are expected to start on July 24th.

The Bottom Line: Public funding is an important part of fixing our broken political system because it allows candidates to run without needing the backing of special interests and elite donors.

A grassroots coalition led by RepresentUs members in Alaska gathered over 45,000 signatures to put the Alaska Anti-Corruption Act on the ballot in November. The bill does a number of important things:

This wasn’t the first time politicians brought anti-corruption reform to the table—but in the past, the legislature always stalled instead of passing anything. What was different this time? It’s no coincidence that politicians passed this law right after voters submitted more than 45,000 signatures to put the Alaska Anti-Corruption Act to a vote in November.

84% of Alaska voters supported the measure, a clear indication that voters were tired of inaction in the legislature. The tide had turned and state politicians had no choice but to finally pass anti-corruption reform or fear losing their seats in November.

The Bottom Line: This is how we fix our broken political system. We go around Congress and pass Anti-Corruption Acts state by state to build momentum for federal reform — and grassroots volunteers are the driving force behind it all. 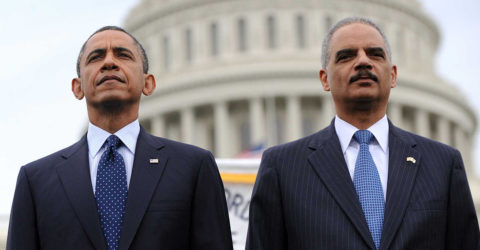 Former Obama Administration Officials are Cashing in After Leaving Office