With Paul Ryan settling in to his new role as Speaker of The House, we’ve been getting a little misty-eyed over former Speaker John Boehner’s career. Perhaps his most memorable lowlight?

In 1995 a bill was introduced that would abolish a yearly $49 million giveaway of taxpayer money to tobacco companies. During the vote on whether or not to do away with the subsidy, Boehner circulated the House floor literally handing out campaign checks from tobacco companies to his fellow members.

While Boehner dolled out the dough lobbyists for Big Tobacco swarmed the House floor, bullying members as the vote grew near.

“There are tobacco lobbyists everywhere. They’ll say, ‘I was your friend in the last election, are you going to be our friend on this bill?’”
~Rep. Linda Smith, Washington Republican

When asked why he chose to give out campaign checks on the House floor, Boehner’s chief of staff, Barry Jackson, replied tersely, “The floor is where the members meet.”

Watch this video to see Boehner fess up.

Astonishingly, Boehner’s behavior was completely legal — and it worked: The industry got to keep its multi-million dollar taxpayer-funded subsidy.

Big Tobacco made nice with Boehner early in his career and kept the money coming. Over his 14 years in the House, Boehner received $497,112 in direct contributions from the tobacco lobby. Boehner stayed loyal, consistently siding with the tobacco industry’s wishes in legislative battles.

Big Tobacco is not the only special interest that had Boehner in their pocket. Boehner was tight with lobbyists representing some of the nation’s biggest businesses, including Goldman Sachs, Citigroup, and MillerCoors, which contributed hundreds of thousands of dollars to his re-election campaigns. Boehner hobnobbed with his corporate buddies over luxury golf resort vacations, rides in private company jets, and extravagant waterfront parties.

It was Boehner’s corporate cronies who got him elected to Speaker of the House in 2010. They lead fundraising efforts and solicited maximum-contribution donations for the “Boehner for Speaker” campaign.

Ironically, in his bid for Speaker Boehner positioned himself as the guy who would stand up to cronyism at a time when lobbying scandals were plaguing the GOP’s image. We can see how that turned out.

Politicians of both parties are letting big money run away with our democracy, but in our view Boehner has earned poster-child status for legalized corruption, partly because he was so shameless about it.

Whether Paul Ryan can live up to Boehner’s “legacy” remains to be seen. From what we can tell, the man is an extraordinarily tough act to follow. 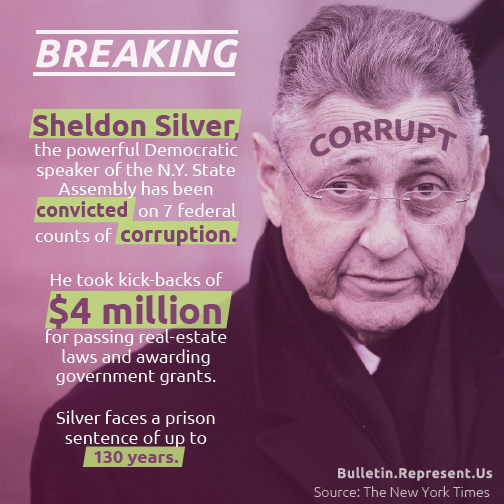